Nothing to dramatic here, but since I was at the Bobcat Bite last summer they have made the change to a more substantial bun. Obviously, it saddened me to see the white squishy go away but this large, juicy burger managed to disintegrate the bun in seconds. The new bun actually works. And another change - the burgers are now larger, weighing in at 10 oz. before they hit the griddle (making them a full ounce larger now and the change is noticeable.) 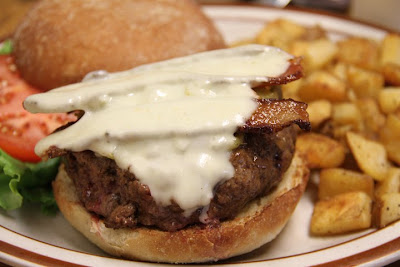 There's one more change that is making John Eckre's life crazy at the grill. They have added the Bacon Green Chile Cheeseburger to the menu (above). I indulged, the bacon was excellent, but something was not quite right. After all of these years eating Green Chile Cheeseburgers I've come to love the simplicity of the burger, the cheese, and the hot green chile. I'm glad to hear the addition of bacon is popular but for me the GCC is king.
Oh, and they have a new website!
Posted by Hamburger America at 10:38 PM

The trip through North Texas and Oklahoma was wild and I will eventually get around to posting a few highlights from the journey. Thanks to my commitment to tweeting on the road someone from El Reno Oklahoma's Onion Fried Day found me at Sid's Diner just after I had finished my last glorious bite of an onion fried burger. He had a camera with him and shot this:
Posted by Hamburger America at 11:43 AM

Wow, Mburger in Chicago Hits It

Before Mburger opened I received a few emails from its creator asking me to come check it out. I found myself in Chicago last week and thought I'd give it a shot. Only open for a few months I figured the place would still be struggling trying to find customers. Man was I wrong.
Mburger is on Huron a half-block off North Michigan surrounded by arguably the Midwest's most expensive real estate. The Apple Store, Brooks Brothers, and Tiffany are all just a few steps away and there are tourists everywhere. How could a tiny burger joint survive here?
I got my answer as I approached the miniscule burger joint - a line snaked out the door of Mburger and up the sidewalk, easily 40 people were waiting and it was barley 12:15. The line moved super-fast and was made up mostly of locals looking for greasy nourishment on their lunch break. I snuck in and found Chef Tim Hockett who brought me a burger and a shake to sample. 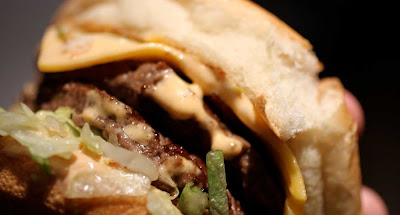 There are 2 reasons why there is a line out the door of Mburger: 1- there is no room inside, and 2- the burger is ridiculously good. The double Mburger is loosely based on an In-N-Out double-double and made with fresh-ground beef pattied in-house. So good.
Tim explained that the name is shortened to 'Mburger' because the place is so small that the 'Ha' wouldn't fit. They installed a few mirrors in the place to make it seem bigger but he told me regardless when three players from the Chicago Bears stopped in recently they took up the entire space. Tim admitted that he used my book for reference and that made me feel good. I'll be back for more in August and have been told I have to try the off-menu item, the Hurt Burger. No idea what it is but will find out soonly.
Posted by Hamburger America at 6:10 AM 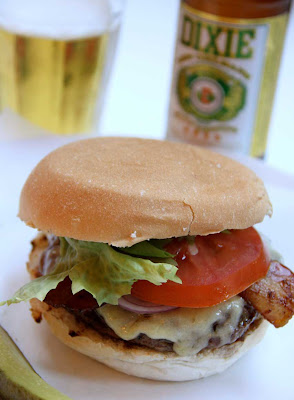 I was invited to Gracie Mansion today to show the catering and kitchen staff my favorite way to make a burger. Naturally, I wanted to show them the smash method after Mayor Mike ate a few burgers at our Brooklyn Burger 'N Beer Garden (as part of the NYC Food Film Festival). It was 102 degrees on the upper east side and the staff wanted to make the burgers outside (even though they had a beautiful flattop in the air-conditioned kitchen). I think they wanted to compare griddled to grilled burgers so they threw two Lodge flattops right onto the grill. It actually worked. 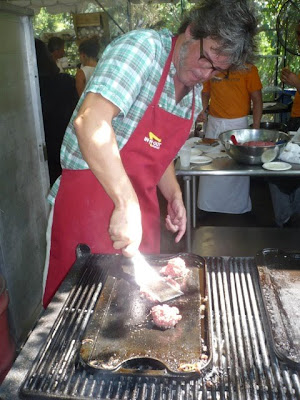 I thought I was just making a few burgers but ended up making close to 30 sliders of varying sizes. It was a real workout and the heat was unforgiving. We tested burgers without any seasoning, save salt on the patty and butter on the toasted buns. And since it was my lunchtime I had them pick up a Vidalia onion so I could make one of my favorites - the Oklahoma Onion-Fried burger. They were a hit, though some complained that they were 'greasy' (which they are of course - that's why they are so good.)
Hopefully I changed their minds. They plan to replace their outdoor flame grills with rented flattops temporarily. Let's see what happens when someone complains that they want their burger 'flame-grilled' at the next 800 person Gracie Mansion cookout. I may take a guest spin on the griddle at the next cookout too..
Posted by Hamburger America at 8:52 PM