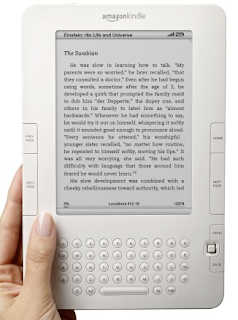 I just noticed that my book is now available from Amazon in Kindle format. I can't imagine what it would be like dialing up my guide book and walking into one of these old burger joints with an oversized PalmPilot (remember those?) And what about the photos? Is the screen in color or black and white? I doubt the photos will look good on this thing or worse, what if they eliminated the photos entirely! If anyone sees this version of my book please let me know...
Posted by Hamburger America at 12:23 PM

Martha and the Burger Show 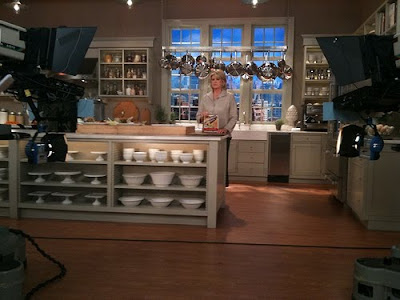 The new season of The Martha Stewart Show has begun and she has devoted an entire episode to burgers (go Martha). Along with Daniel Boulud, Pat LaFrieda, Adam Kuban, and others I was there for the taping today (airs this Friday, 11am, ch. 4). I have a small segment after the first commercial break where I obviously push the book. I'm asked two questions before the cameras go to Boulud who of course is there to construct, for the cameras and Martha, the famous DB Bistro Burger. They do cut to shots of the Bobcat Bite's Green Chile Cheeseburger and Solly's Butter Burger and during the entire interview Martha is holding my book for the camera (Adam Kuban photo above).
Bill O'Donnell, one of my hamburger heroes and the owner of the Corner Bistro, was also there and produced 180 mini Bistro Burgers for the audience (that's Boulud, me, and Bill backstage in the green room). 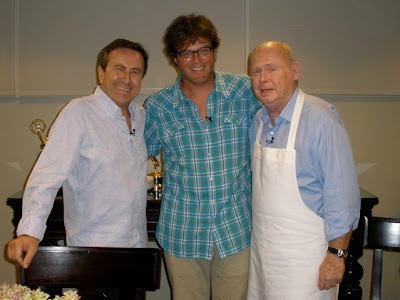 Adam Kuban was sitting right next to me live blogging (Martha covered all the bases) and the entire audience had to wear these goofy tees that said, "I Love Burgers." I refused to put mine over my shirt so the producers settled for mine under. I felt much better about that one. And Boulud, LaFrieda, and others didn't have to wear one (the format was a little strange where the real celebs got to be on stage with Martha but Adam and I were in the first row with these tee shirts on...).
It was fun and painless and the entire audience received a copy of Hamburger America on the way out. The producers tried to sneak me out a side door but one audience member saw me and after 15 minutes I had signed about 40 books. It was my pleasure.
After the taping I made tracks for the screening of Hamburger America at the Tom's River Library in New Jersey. Outside of a host of tech problems the screening went well and the audience of about 100 really had a great time. The local Five Guys was there and supplied the crowd with free burgers. 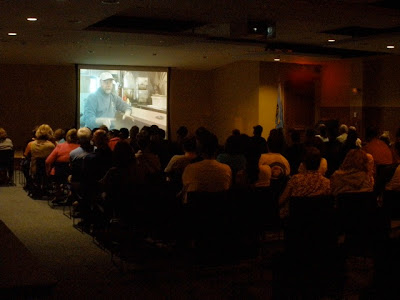 Strangely, for a day of programming surrounding the burger I somehow managed to only eat that Bistro mini burger at the taping and half of a Five Guys small burger at the screening...
If you can, tune into the Martha Show this Friday the 18th at 11am EST, Channel 4. Click here to check the listing in your area.
Posted by Hamburger America at 10:55 PM 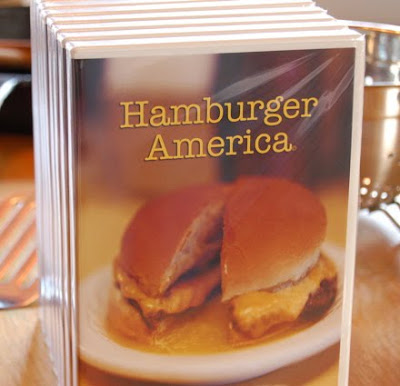 The Tom's River Branch of the Ocean County Library will be screening Hamburger America on Sept. 15th, 2009 at 7pm. I think the event is free but you'll need to register here if you want to attend the screening. I'll be there to sign books and answer questions so come on down. I put the event programmer in touch with the local Five Guys so you'll have some fresh burgers to look forward to as well. Hope to see you there.
Posted by Hamburger America at 6:56 PM 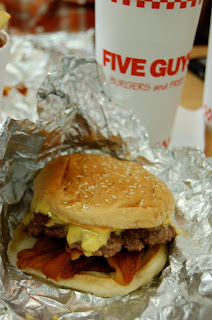 I've just confirmed a rumor that a new Five Guys may open in Williamsburg in December 2009. Craig Cohen, owner of the Five Guys franchise locations in Brooklyn Heights, Bay Ridge, and Park Slope told me the new location will be near Bedford Ave. but no lease has been signed.
Clearly his other locations are doing well to warrant a 4th location in 2 years. This location could be his biggest winner yet and put a local fave like Dumont Burger on the defensive (I know there's no comparison but try asking for a free refill at Dumont, or fast service).
Posted by Hamburger America at 5:26 PM