Chris Madrid Has Passed Away

I guess I'm a little behind on the news but I just found out that one of my hamburger heroes, Chris Madrid, passed away March 11th. He was the king of burgers in San Antonio and made the refried bean-topped burger world famous. Chris didn't invent the thing, he but he most definitely expanded its fan base and made one of the best 'Beanburgers' around.

I met Chris for the first time in May 2010 while I was compiling burger data for the revised edition of my book. When I pulled up in front of the restaurant he was already outside, hand extended, welcoming me to his 35-year old burger institution, Chris Madrid's. The man talked a mile-a-minute and in no time I had a Shiner Bock in my hand and an order in the kitchen. He was a true host, always smiling and clearly loved everything about the world he had created from the people who worked for him down to the burger he made famous.

"The Macho Tostada Burger is a sight to behold. As you contemplate how to eat this enormous pile of heavenly goo, take a moment to appreciate what is in front of you. The bun, toasted on the grill, can barely contain the brown-and-yellow hues of its contents. The burger patty itself, a thin-pressed wonder made from fresh 75/25 beef, is hidden beneath layer of refried beans and cascading cheddar.

The burger is impossible to pick up. I found that cutting it in half made things slightly easier. My first bite of this legend sent me soaring. As I easily made my way through the macho I wondered why this burger was not replicated in every corner of America. The beans and chips worked so well with the beef and the cheddar tied it all together. Chris said it best when he told me; “It’s like a hamburger and an enchilada plate in one.” What an amazing invention. -Hamburger America 2011

Chris Madrid made a serious impact on the fabric of the American hamburger and will be sorely missed. Rest in peace Chris, and may your Macho Tostada live on. 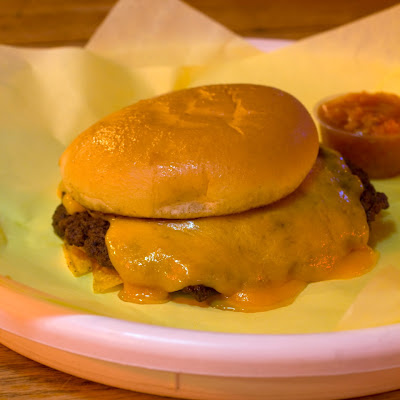 The Macho Tostada - a sight to behold 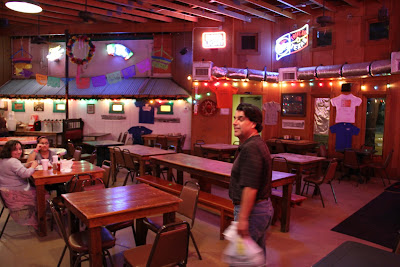 Chris Madrid as he accidentally walked into a shot I was taking at the end of a long day at his San Antonio burger institution, May 2010
Posted by Hamburger America at 11:18 PM 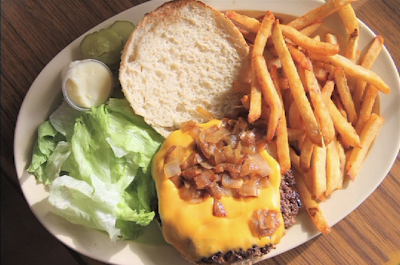 It's been a while but I've just uploaded the next episode. Chicagoland Burger Triptych, episode #5, was shot way back in November 2011 and includes 3 of my faves - Edzo's in Evanston, the new Mburger in the Water Tower, and the classic Top Notch Beefburgers way down on 95th St. in Beverly. The entire journey took almost 4 hours to complete but Serious Eats Chicago's Nick Kindelsperger came along for the trip to keep me company. It was a long yet rewarding lunch.
To see episode #5, click here to visit the new Burger Bites page on the Hamburger America website. All 5 episodes are now neatly arranged in one place.
Posted by Hamburger America at 2:42 PM