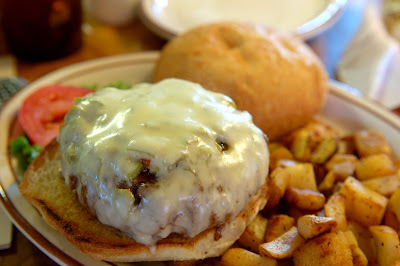 We stopped into the Bobcat Bite for our semi-annual Green Chile Cheeseburger fix and noticed that once again not much has changed. That is until John Eckre conspicuously approached me in the dining room with a bag of buns. "I want your professional opinion," he started and my heart sank. The bag contained 5 large, semi-hard rolls and were cold to the touch. John explained that the white squishy buns they currently use tend to disintegrate in the to-go orders. I can safely attest that the buns do nearly disintegrate even if you get them hot of the grill and eat them at the counter. It's just a fact of life - Bobcat burgers are a bit much for the buns.
"I like them because they actually taste like homemade bread," he continued. I think I made a face but I had to give them a try. John is a good friend but my expectations were low. I was SHOCKED to discover that the bun worked. The 9-ounce patty at the Bobcat is a beast but this test bun cradled the burger perfectly. After John had warmed the bun on a nearby griddle it was as soft as a white squishy and held up to the copious amount of juice a Bobcat burger produces.
Bonnie Eckre is not interested in a new bun but only because she fears change. I think she'll change her mind. This bun was made for the Bobcat Burger. Sometimes a little change is good (just a little). For now the white squishys are still in use (and understandably John is afraid to break it to his current bun supplier).
Posted by Hamburger America at 3:38 PM

I was just asked to be a special guest at the Blue Moon Burger Bash, hosted by Rachel Ray, at the Food Network NYC Wine & Food Festival. They've asked me to bring my Hamburger America Slide Show to the event to be projected onto the tent's ceiling (you can view a very small portion of it here). The slide show contains hundreds of images of burger joints, burger people, and of course burgers. The collection is the result of over 10 years of exhaustive burger research. The show also contains all 200+ photos from my book.

The Burger Bash will also be auctioning off one of my large framed editioned burger prints (image TBD) and the proceeds will benefit the Food Bank for NYC.

I missed last year's bash (and the one in South Beach) so I'm looking forward to the event. Hope to see you there!
Posted by Hamburger America at 7:44 AM 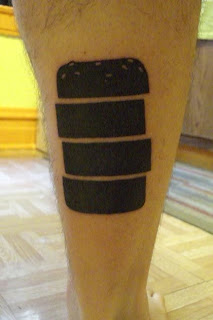 How committed to burgers and punk are you? Chicago expert burger taster Jay has proven his love of both by getting this kick-ass tattoo. The design is a cross between a very thick burger and the well-known Black Flag logo. Jay pointed out though that he cannot claim credit for the design - the 'burger bars' logo came from a spoof by comedian Neil Hamburger of Black Flag's seminal EP 'Six Pack'. Jay told me, "Black Flag pretty much changed my life. I'd long considered getting a Black Flag tattoo...This one just seemed too perfect."
Posted by Hamburger America at 1:38 PM 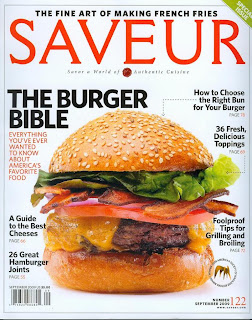 This month's Saveur magazine has 28 pages dedicated to burgers and yours truly gets a few mentions. They did a great job pulling together lots of talent and photos for the issue and are calling it the 'Burger Bible' (but don't expect anything that definitive). The layout is eclectic and covers everything from burger art to regional burger sauces. Pat La Frieda even gets their own sidebar. The mag asked me to submit 2 shorts pieces and one was chosen for this issue, a very brief profile of Sid's in El Reno, OK (the piece that got dumped was about the Double-Double Animal Style and will reappear somewhere else I hope).
Posted by Hamburger America at 5:22 PM

Musings from the Wisconsin Burger Belt 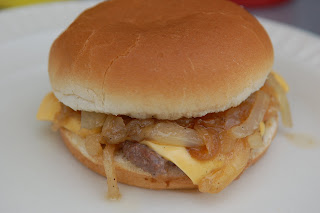 It was only 11am when I had inhaled 2 burgers 'with' at the American Legion Post #67 burger stand which meant that I needed to think about lunch soon. Fortunately I was in what I like to call the 'Wisconsin Burger Belt' which extends from Madison to Milwaukee. Just off Route 94, which connects the two cities, are a handful of tiny Mom 'N Pops that serve classic thin patty wonders. There's Zwieg's, Wedl's, and the Post#67 burger stand just to name a few and of course Madison and Milwaukee have their share of great burger spots. 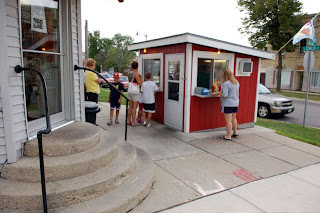 Local Expert Burger Taster Todd and myself plotted a course that would take us to Wedl's in Jefferson, then onto Madison for burgers at The Plaza and Dotty Dumplings, all for lunch.
Wedl's, formerly known as Peterson's, is in my book and serves burgers out of what must be the smallest burger shack I've ever seen. Back for my 4th visit I was eager to order one with grilled onions and looking forward to meeting the new owners. I'm happy to report that not only are the burgers unchanged and amazing, the Wedl family plans to hold onto the stand for many years to come. The Wedl's son Bert worked for the Petersons and is the heir apparent to the decades-old business. The stand is safe for now. 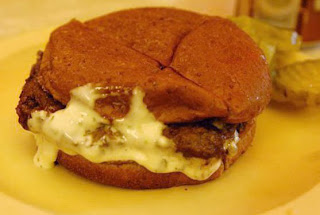 We made it to Madison and met columnist and friend Doug Moe at The Plaza. Fortunately, owner Dean Hetue was at The Plaza when we arrived and I was able to meet the man in possession of the secret recipe for the tangy white sauce that is slathered on their burgers (for the book, all interviews with Dean were by phone which only deepened the mystique). We savored the sauce, the burger, and moved onto Dotty's just up the street.
By the time we arrived at Dotty Dumpling's Dowry I was full. 4 burgers for lunch had caught up with me but I wasn't leaving Madison without a bellyful of Sprecher's Root Beer (on tap) and an order of the Wisconsin's proudest gastronomic quirks - deep-fried cheese curds. The are, when prepared well, heaven in a fry boat.
By the time I hit the road back to Chicago I was in a daze. My caloric intake was high but somehow that didn't stop me from pulling over for a chocolate custard with hot fudge at Culver's. There's nothing like creamy cold custard, even at this so-so burger chain. The Lower Wisconsin Burger Belt was great for lunch. Eventually I need to venture into the burger joints North of Route 94.
Posted by Hamburger America at 9:58 PM 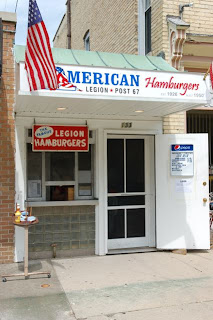 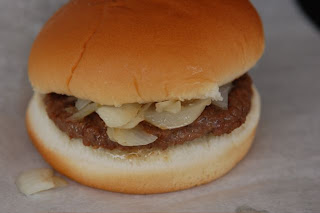 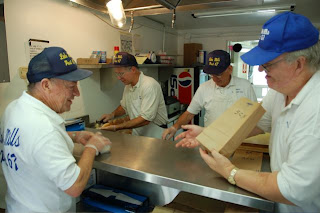 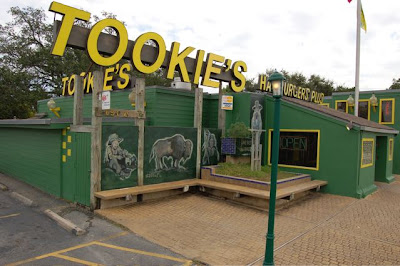 Ever wanted to own a classic burger joint? Well you are in luck because Jim Spears, owner of the recently shuttered Tookie's in Seabrook, Texas, has put the restaurant up for sale. After the roadhouse closed with flood damage following Hurricane Ike Jim was torn on whether or not to sell or reopen. Jim, 68 with no offspring or family to take over the business, is selling Tookie's as a package deal that includes the structure, the name,  AND the recipes. That's right, buy Tookie's and get the secret recipe for the famous Squealer!
If you are serious about buying Tookie's call Michael Cooley at Keller Williams - 281-335-0335 or email him at mlcooley@kw.com. Keep the dream alive.
Posted by Hamburger America at 9:45 AM