My Burger Roundup for Edible Queens 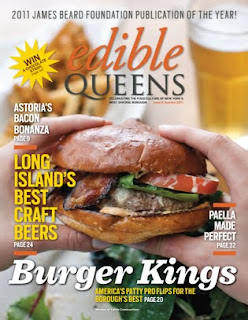 Edible Queens asked me to write about my 5 favorite go-to burgers in Queens and the piece is in their Summer issue, on streets now. The standouts, for the most part, were pretty easy to spot and not surprisingly 3 of the 5 had only been open for under a year. The list? Burger Garage, Donovan's Pub, Custom Burger, Astor Bake Shop, and Hollis Famous Burgers. Pick up a copy of the mag at these places in Queens.
Joe DiStefano published this companion piece yesterday, a pretty straightforward interview with me..
Posted by Hamburger America at 1:59 PM 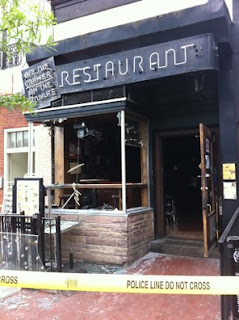 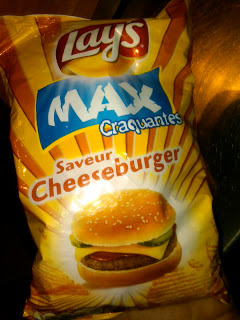 My good friend Seth brought this bag of chips all the way back from France just for me today. 'Max Craquantes' translates basically as 'super crispy' and they are. I opened the bag and it farted out a cloud of pickle/ketchup flavoring that almost turned me off. I soldiered on though and ate a few. They do taste like 'cheeseburger', just not necessarily one that I would eat. And they are loaded with M.S.G. so I think I'll avoid eating the rest of the bag. Those French are crazy.
Posted by Hamburger America at 9:12 PM

Smashburger is in NYC!

The Denver burger chain that has expanded throughout much of the country has made landfall in NYC, opening today at its first location in Brooklyn. Smashburger has won me over because of its use of fresh ingredients but the methodology behind the griddling of the patties is what really gets me going. True to their namesake, there's a lot of smashing going on.

Two days prior to opening, I was invited to check out the first NYC location on Dekalb Ave near Long Island University and Flatbush Ave. The owner surprised me by having Smashburger founder Tom Ryan on-hand for a meet and greet. Tom is a true fast-casual visionary and led us on a tour of the kitchen with a full demo of the smashing process. I'll avoid the details of my visit to avoid spilling any trade secrets, but let's just say these dudes have smashing down. 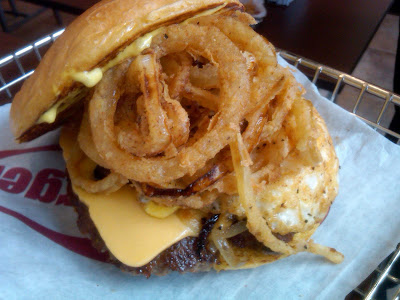 Tom talked me into ordering an item from their 'hidden menu', the Sin City Burger (pictured above). Created as a stunt and served first in Vegas, the Sin City is a decadent pile of crisped and sauteed onions, cheese, bacon and Smashsauce on a 1/3 pound patty, topped with a fried egg. "We imagined a burger that involved breakfast and dinner," Tom explained, "since you never know what time it is in Vegas." The Sin City is downright awesome and no longer on any written menu (as of Feb 2011), that is unless you know to ask for it (and apparently available 'secretly' at every location).

Soon, the new Brooklyn Smashburger will be serving beer too. It'll be a hard place for me to avoid..
Posted by Hamburger America at 11:14 AM