I Was a Silent Auction Item 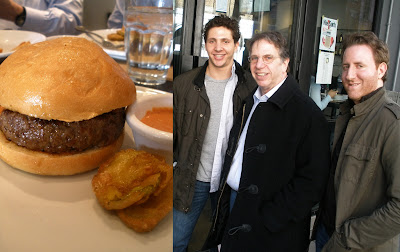 Way back in April '08 I offered up myself as an item for a silent auction to benefit Publicolor, a non-profit based in NYC. The lucky high bidder would win a hamburger triptych with me, a tour or three of my favorite burger spots in Manhattan, all for lunch, with the winner and 2 friends. Scheduling conflicts pushed the date of the lunch all the way to this past Saturday but I did make good on my promise. The winner passed on the prize to her husband Brad who wisely chose his new father-in-law Roy and new brother-in-law Matthew as his guests. Clearly, Brad was raised well.
My lunchmates for the day met me at our first stop, Zaitzeff down in the eerie weekend quiet near Wall Street. I explained the importance of pacing and we started with quarter pounders (though the 1/2 pounders are better). The burgers turned out a little overcooked but still moist and tasty. I caught Brad just as he was about to douse his burger in ketchup and let out a "WHOA". He smiled and said, "That's a no-no, huh?" I explained my position on ketchup (well documented here) and he agreed to go without. A wise move that he admitted later in the day was a the right move.
We jumped a 5 train for our next stop, one of my newer favorites, Stand on 12th St. After navigating their ridiculously confusing menu we pretty much settled on the same burger - the 'House' which is basically a burger with grilled onions and a mayo-based sauce (I usually avoid tomato and onion on a burger and so did some of guys). This time the burgers were cooked perfectly, dripping juices everywhere. Brad was tempted by a chocolate shake that he spied across the restaurant but I reminded him that we still had a few P.J. Clarke's burgers to put down.
We hopped on the 6 train and made it to P.J.'s only to find the place packed. The bar, so inviting, became the perfect excuse to start drinking. We were all pretty full at this point but managed to put down a beer waiting for a table. The guys all ordered the same burger as me, the Bearnaise burger, and within minutes we were eating. I took my first bite and found an almost cold center, dark red and way undercooked. Mine went back to the kitchen with apologies and returned perfectly cooked (and as a new patty with no bite taken, smart move on their part.) Brad, Roy, and myself had trouble getting past halfway on the burgers but the younger Matthew had no problem putting his away. It was actually Matthew that ate the most beef that day, consuming his own and half of his father's burgers all day putting his total intake at around 5 six-ounce burgers. Very impressive.
We tried to stay away from sides to save room for meat but the draw was too strong to indulge in the deep fried pickles at Stand and the onion strings at P.J.'s.
Overall the burgers were hit-or-miss at my favorites but that's bound to happen once in a while. The real winner of the day was Stand and I think my lunchmates agreed. I had a blast with Brad and his new family and I think they had a good time too. Would I do it again? Absolutely. Maybe next time in Brooklyn...
Posted by Hamburger America at 11:04 AM 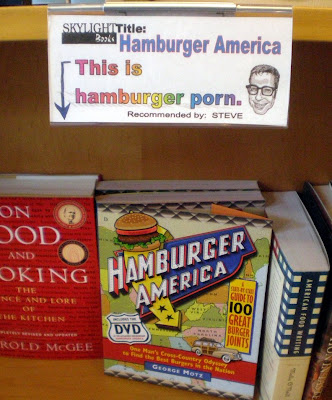 Tookie's May Re-Open, May Not 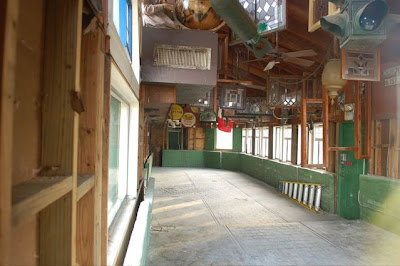 There may be hope for the shuttered Tookie's after all. Owner Jim Spears finally returned my phone call ("I was on vacation. Sorry I missed your call!" he told me). After a lengthy explanation that included mountains of insurance paperwork, new building code problems, future highway expansion, fan mail (and a new Tookie's' fan page on Facebook), I finally asked him, "Yes, or No?" He said the answer was not that easy. He wants to reopen but it may be a while. He also pointed out that he's approaching 70 and has no offspring to take the helm, but you can count out any rumor to sell the place. The good news is that he still has it in him and will probably reopen.
The only way you can help is to tell him how much you loved the place. He told me that he can't believe the outpouring of support he's received since the hurricane. The building looks to be in decent shape and anything over the 5 foot watermark was spared. Anything under that was destroyed, which included all of the custom made tables and just about everything in the kitchen. And if that were not enough, in the days following the storm the place was looted and thieves made off with kitchen appliances that had survived.
Jim will not take donations to reopen but enjoys reading the comments on the Facebook page so keep those comments coming!
Posted by Hamburger America at 8:16 AM 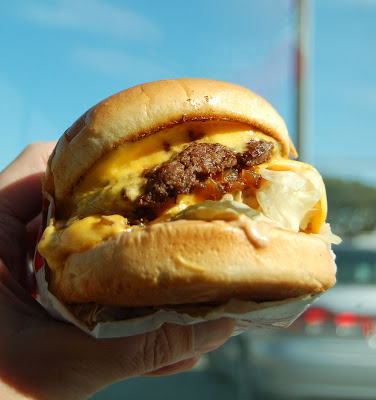 For years I've made In-N-Out #117 one of my last stops in LA (and sometimes my first) before getting on a plane at LAX. The Westchester store is located at the end of a runway adjacent to a park that offers awesome planespotting. It's a great spot to enjoy a Double-Double while the belly of a 747 roars overhead only 4 seconds from touching down. As is custom, I raced to the airport yesterday leaving just enough time to hit the In-N-Out. But this visit was like no other. On this visit I had a hamburger revelation.
My usual order at In-N-Out consists of a Double-Double no tomatoes, fries, and a chocolate shake. For some reason I've never strayed from the printed menu into the cultish and much talked about 'secret' menu. Yesterday was the day.
For the first time ever, I ordered a burger off of the secret menu (I have however ordered the Fries Animal Style before). That's right, yours truly had never consumed the fabled 'Double-Double Animal Style' and I can safely say that I will never go back to the standard menu again. I have seen the light.
Why had I never tried this burger? The name implies something unruly or a surefire recipe for a stomach ache. Truth is, the Animal Style burger is none of this. The cult favorite is perfect and totally manageable. To a standard Double-Double add grilled, chopped onions, extra 1000 Island dressing, and pickles. You heard correctly, pickles, onions, and extra sauce, that's it, but these small additions create a huge taste explosion. I had heard a rumor once that the burger is also cooked in mustard and after a quick call to the In-N-Out hotline found it to be true. "The patty is spread with mustard as it cooks on the griddle," a very friendly In-N-Out associate told me. Now I know.
I've also discovered something else from the secret menu that has replaced my standard chocolate shake - the Neapolitan shake. Ask for one and you'll get all three flavors (vanilla, choc, strawberry) swirled, not mixed, together.
The rules have been re-written. The Animal Style burger and a Neopolitan shake will be my default at In-N-Out from now on. I almost went back to get one for the plane but realized that it would never taste the same as my first, sitting at the end of the runway. I'll have to wait until my next trip to LA.
Posted by Hamburger America at 1:45 PM