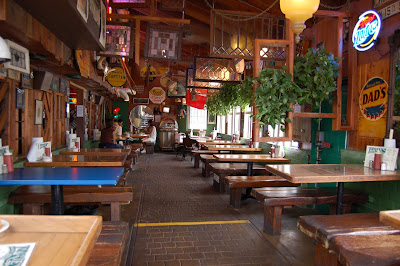 Tookie's Hamburgers & More, the home of the Squealer, is reopening after years of being shuttered following 2008's Hurricane Ike. The iconic burger joint and Texas roadhouse south of Houston sustained substantial flood damage and owner Jim Spears struggled to reopen. Recently however, a guy named Barry Terrell bought Tookie's (which was pretty much gutted following the storm and damage from looters) and has brought back the original menu. Spears had woes beyond the damaged structure, like the future widening of the road where Tookies sits, being subject to new building codes and piles of insurance paperwork from the storm. Not sure how Terrell pulled it off but he did apparently. 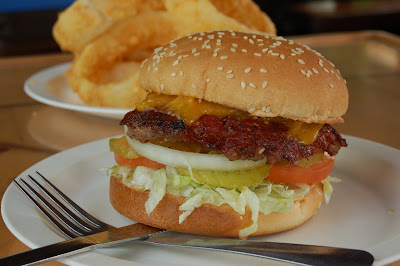 Tookie's was in the first version of Hamburger America but I pulled them out of the completely revised edition since there was no word of its reopening at press time last December. Looks like any day now you'll be able to enjoy the one-and-only Squealer, the burger Tookie's made famous by grinding bacon into their patties. The process is so secretive that competing restaurants have sent busboys to apply for jobs at Tookie's in an attempt to steal the recipe. I've tried myself and failed. The only way to truly enjoy a Squealer is to get one at Tookie's.
I applaud Terrell for being crazy enough to reopen this iconic burger joint. Chalk up another win for nostalgia!
Posted by Hamburger America at 7:58 AM 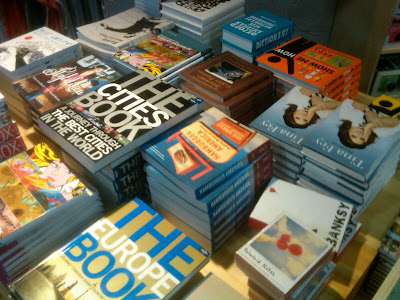 Check this out! Urban Outfitters recently purchased a bunch of copies of the revised edition to sell in that cool little book section of their stores. I'm totally honored. Also, take a look at the selection of authors I'm sharing table space with (Jay-Z, Tina Fey, and Banksy).
Posted by Hamburger America at 9:24 AM