After 2 weeks at 10pm (EST) Burger Land on Travel Channel is moving to a new time slot, taking over Bizzare Foods America's 9pm Monday slot. Burger Land will stay at 9pm thru the season, which runs for 11 new episodes to the end of June. The show is ALSO re-airing at midnight as well. 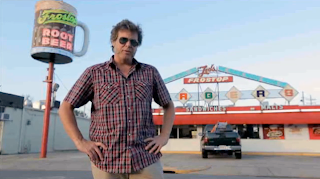 This week, we are in New Orleans! Such a great city and we managed to hit Mardi Gras just right...featured on this week's episode are Ted's Frostop, Camillia Grill, Bozo's and Port of Call. 4 great burger destinations.
I'll be live tweeting the new episode, which is followed by a repeat of the Los Angeles episode.
Posted by Hamburger America at 9:42 PM