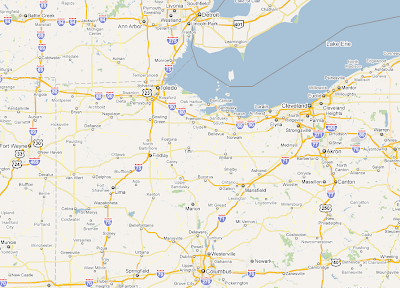 I'm headed to Ohio/Detroit tomorrow for a few days for hamburger research for the revised edition of my book. The plan is to hit 9 burger joints over 3 days. Follow me on Twitter to see how the trip goes.
Posted by Hamburger America at 9:14 AM 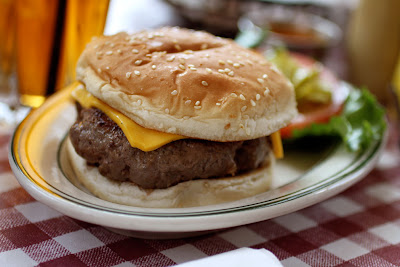 When a burger joint adds a burger to the menu it's usually a change in toppings, a new flavor to an existing menu. When Bill's decided on change, they actually added an entirely new burger method to their short menu.
"Don't worry," executive chef Brett Reichler told me, "the original burger is still on the menu." Whew, that was a close one. I love this burger which is an authentic nod to the great Midwestern smashburgers. Bill's has purchased a few of those top-down griddles, a sort of over-engineered George Forman grill, to cook their 'new' burger concept with speed. Bill's has decided that they needed to add a classic pub-style burger to the menu. They are obviously trying their hand at a thicker patty, Corner Bistro-JG Melon-type burger with decent results. The burger is served on the classic toasted white squishy bun but I'm not the one to ask about its greatness. I prefer the thinsmashedgriddlecrunched wonders and there really was no room for improvement. I'm assuming this burger is for those who walk into Bill's, order a burger, and then say, "That's It?" In other words: The ones that just don't get it, the ones that require a burger with a little pink inside and think the thin patty is not substantial enough (which it most certainly is). Bill's is now covering all the bases. Very smart!
Now here's a weird one: Bill's has also moved to a different bun for the rest of the older burgers on the menu. The old burgers get the newer bun and the newer burgers get the older bun (?). The new bun is fresh-made and damn good. It's nice to know however that if you require the old bun with the older burgers you are in luck.
Posted by Hamburger America at 3:51 PM

I found myself in Miami briefly again last week and knew exactly where I was headed for a burger. Outside of some of the incredible hamburger experiences I've had all over the country in the past decade, this place (and this burger) are still knocking me over. You will not find an experience like this anywhere else in America. 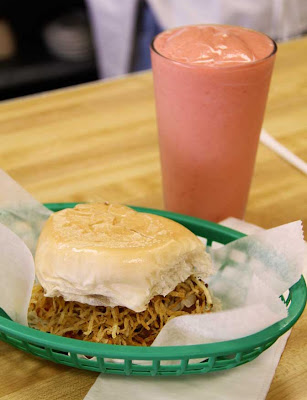 I love the frita and El Mago's impossibly good flan and added a batido this time for fun. A batido is basically a cross between a smoothie and a milkshake and is damn good. I ordered the mamey batido because it sounded the most exotic and wow was that a good call (pictured with my first frita of the visit).
After savoring a second frita I bid El Mago farewell and headed straight for the airport (which is only a few mins away). El Mago told me that just before I walked in a woman picked up a few fritas to bring back home to California. I wonder how that turned out. You really need to enjoy them right there at the counter and know you'll be back again soon.
If you are in Miami, skip the gourmet joints and make your way over to this Calle Ocho outpost. You will not regret it. 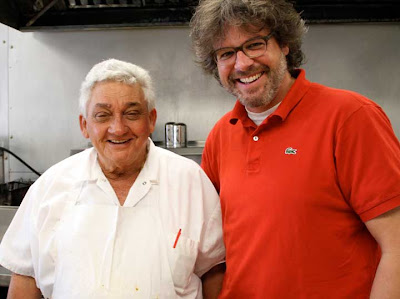 Posted by Hamburger America at 10:06 PM

The Burger Garage To Open Soon

The paper is still up on the windows but I got a sneak peek today inside the soon-to-be-open Burger Garage in Long Island City. Brothers Jim and Adam Pileski are behind the new burger joint and say they'll be serving burgers in just a few weeks. The location couldn't be better for the thousands of employees of Citigroup seeking lunch since Burger Garage is just across the street from the familiar blue glass tower. Outdoor seating is also planned as well as beer and wine. 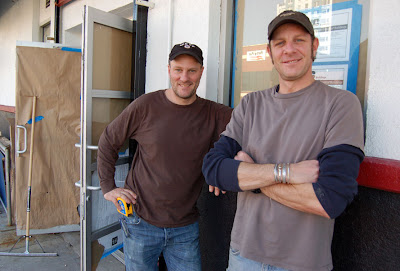 Coincidentally, Jim and Adam are childhood friends of mine and I know they know their burgers. Jim is obsessed with quality ingredients so I'm guessing these burgers will kick some ass. Stay tuned.
Posted by Hamburger America at 11:20 PM