Amazing Gift From Glenn at Solly's

We are in production on a hamburger television show (details coming soon, and Eater broke the story back in November). Without giving away the show, one of our 'subjects' was an old friend of mine, Glenn Fieber from Solly's in Milwaukee. He was happy to be included in the first episode and created for me this one-of-a-kind chef's jacket. 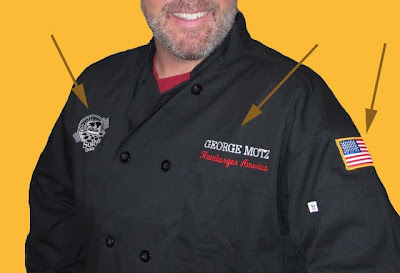 Thanks Glenn! Love the American flag touch. I'll wear it with pride.
Posted by Hamburger America at 7:13 PM

Another Classic Burger Joint Is Gone

I hate having to report this but one of the burger joints in my book has closed, possibly for good. I've recently learned that Pak-A-Sak, the nearly 60-year-old Oklahoma burger institution, shut off its flattop over a year ago. I received the unfortunate news from an Enid, OK native and confirmed the story Friday with a call to Enid City Hall. 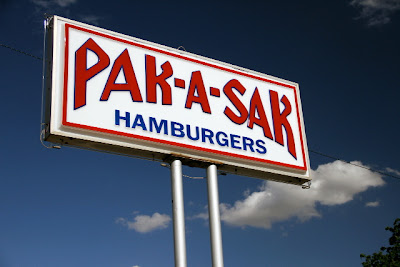 It was hard to beat the Bible passages, romance novels, and sliders at Pak-A-Sak. And the cheese tots (one of America's greatest gifts to the world). Simplicity and tradition was the name of the game at this Northern Oklahoma burger joint. The burger to get was the regular with cheese and onions, a small smashed patty burger that shares DNA with the original American hamburger. It was an oniony cheese-and-beef bomb that melted in your mouth. I can taste it now and will miss it dearly.
I'm not sure of the details of its demise but this is exactly the type of American institution that needs to be saved. The importance of the American burger joint is rarely contemplated and I hope it is not too late for places with similar predicaments. Once again, the idiom, "You don't know what you've got 'till it's gone" rings true.
Here are a few photos of Pak-A-Sak, as I saw it the last time I was there, July 22nd, 2010: 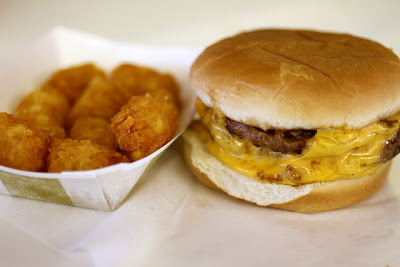 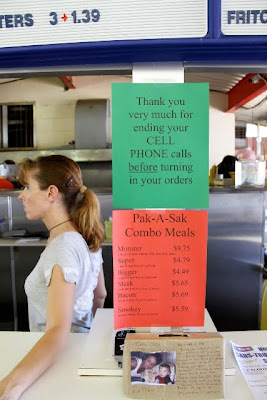 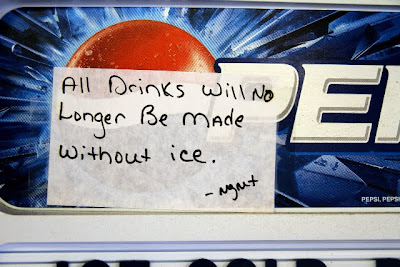 Posted by Hamburger America at 7:43 PM

Steak 'N Shake is in NYC

As if the burgerscape in NYC couldn't get any better one of the best all-fresh-beef burger chains in America decided to open a tiny outpost in the big city. I've always been a huge fan of Steak 'N Shake but had to find myself in the Midwest or Florida to enjoy their smashed doubles with cheese. Now, all I need to do is hop on the subway.
But the new Steak 'N Shake is more than just an urban version of their successful 78-year old burger concept. The new Steak 'N Shake 'Signature' introduces two important menu items that will not be found at any other location: Fresh-cut fries and the Signature Organic Burger. That's right, fresh ground organic beef in a thick-ish 6-ounce patty that is a bit of a departure from the classic thin, smashed patties that I love so much. Regardless, it was a great burger. I was skeptical of the origins of the organic beef (so much comes from overseas). I asked and found out that the powers-that-be spent a lot of time and energy sourcing organic beef in the US. We should all be thankful that a burger chain in the US chose to stick to American beef.

You can still get the classic double cheeseburger with patties smashed gloriously thin and they taste EXACTLY like the ones I've eaten in Ohio, Florida, Indiana, Michigan and Georgia. You can also indulge in their amazing shakes at this location. Hand-dipped shakes, not the kind squeezed out of a soft-serve machine. And true to NYC form, booze will be available. Look for Brooklyn Lager and an impressive wine dispenser filled with bottles of 2007 Ridge.
The location for the new Steak 'N Shake is fitting. Not just because it's positioned to take full advantage of the Times Square onslaught, but because the Indianapolis-based burger company is next door to NYC's most famous displaced Son-of-Indy - David Letterman. My guess is it won't be long before Dave is talking about the taste of home that is just a few steps from his front door.
Steak 'N Shake Signature opens tomorrow at 10am. I'll be there to cut the ribbon (seriously!).
Posted by Hamburger America at 9:56 PM