I received an excellent email from a fan saying that he and his wife were considering riding their Harleys from their home in Iowa to a burger spot from my book 800 miles away. This is my kind of adventure. Not just because it involved a great trek for a hamburger, but because it also combined my love of motorcycling with a cause that is close to my heart.
They have enlisted 2 other friends in Iowa to make the trip this Friday May 1st and are looking for other riders to join them along the way. If you live between South Central Iowa and Memphis click here to get involved with "Bikes For Burgers" (you should also make a donation to their cause, breast cancer research, if you can). They plan to hit some of my favorites on the trip: Town Topic in Kansas City, Cotham's outside of Little Rock, Arkansas, and Dyer's in Memphis.
They plan on doing a trip like this every year near May 1st so I told them I would DEFINITELY  join them next year on a rented Harley for some portion of the trip. Now that's Hamburger America.
*************UPDATE****************
The ride organizer has just informed me that due to the awful weather throughout the southern Midwest the trip route has changed. They are now heading north to Milwaukee, Madison, and Minneapolis. I hope they stop at Matt's Bar for a Jucy Lucy. Check back for trip photos here next week.
Posted by Hamburger America at 10:09 AM

New In-N-Out Tell-All Book Is Out 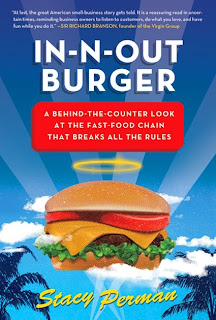 Stacy Perman's new In-N-Out book is out and a must for anyone who is even slightly intrigued by this cult burger phenomenon. In-N-Out's attention to detail, the strange but successful business plan, the biblical references under the soda cups...it's all here. What more could you ask of a book that gives you all this plus a family that has endured as much tragedy as the Kenneys have (well, maybe not that much). The favorite son and heir to the In-N-Out throne dies in a plane crash and is replaced by his pill-popping, drag racing older brother. All the time the mission of the burger chain stays true to its roots and to this day they are still cranking out the same quality burger that first left the drive thru over 60 years ago.
Keep in mind that this is a business book, published by Collins Business, written by a staffer from BusinessWeek. That said, the story of In-N-Out is covered from a business angle which is absolutely fascinating. Just the fact that someone took the time to tell the story is enough for me. I was a fan of In-N-Out before reading Stacy's book, now I'm a believer.
Posted by Hamburger America at 3:23 PM 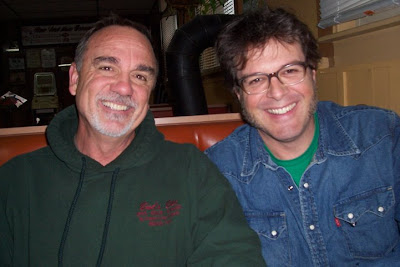 I landed in Denver last Thursday just before the city was covered under 2-4 feet of snow. That did not deter me from the plan at hand which was to get to Bud's Bar for a burger. Owner Mike Steerman was there (above, with me), as well as his wife Mary, bartender Nanc, and longtime grillperson and burger genius Judy. I had some friends with me that were thoroughly impressed with their simple yet perfect double cheeseburgers. There was an impromptu book signing and many beers were consumed. I love being a hamburger expert. 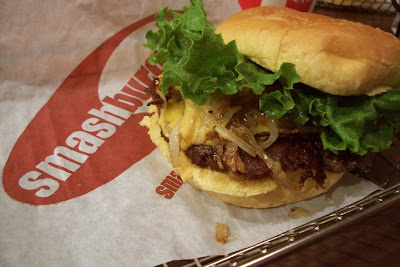 Another burger spot that I had to visit after reading many emails from enthusiastic Coloradans was the newish chain Smashburger. Clearly modeled on the successful Five Guys, Smashburger hit the spot. They use balls of fresh ground beef that are smashed thin on a flattop griddle with a special misshaped smashing tool (that looks a lot like the channeled smasher at Five Guys). The result was a glorious grease bomb that may have actually been too greasy (if that's even possible in my world). Regardless, I'd go back again and again. Unfortunately, the image of the burger on their website looks nothing like the real thing, which in person looks amazing...
Posted by Hamburger America at 11:44 AM

Wow! CNN ran a great piece about burgers after an interview with me. It's on the front page of their website today. I do a lot of media but this was a big one. How do I know? I must have received over 50 emails and phone calls before noon today from friends, fans, and family.

I did not know however that they were also interviewing Guy Fieri for the piece. Do I need a new hairstyle now?
Posted by Hamburger America at 4:59 PM 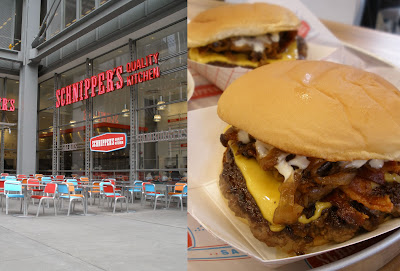 Holy crap did I have a great burger yesterday. The brothers Schnipper, after successfully creating and guiding Hale & Hearty Soups, have tried their hand at hamburgers and the result is amazing. They invited me into their 8 week-old Schnipper's Quality Kitchen for a taste and I was not about to turn them down. I had a feeling this would be good.
Expert burger taster Kris B and myself decided we need to see the place in full swing at lunchtime. Thanks to the built-in lunch crowd that works right above Schnipper's in the new New York Times building the place was packed. The restaurant is enormous and can seat 170 inside and out.
The menu goes beyond burgers but Andrew Schnipper, the business end of the two, explained, "About 50% of our sales goes to burgers, fries, and shakes, 25% of that just burgers." The other 50% includes staples like hot dogs, and a large selection of salads and sandwiches (that we did not try).
The burger at Schnipper's starts as a 1/3 pound hand-pattied beauty. Jonathan, the food side of the Schnippers, told me, "Every morning I take a handful of the fresh-ground beef when it comes in and throw a burger on the griddle to test." They get their beef from Master Purveyors and comes in as an 80/20 chuck blend (my favorite) that has dry-aged trimmings thrown in. Jonathan told me, "Master supplies many of the best steakhouses. Our trim comes from those steaks."
Kris B and I sampled 3 burgers: the bacon cheeseburger with carmelized onions, Schnipper's version of a green chile cheeseburger (which is not really a GCCB but made with a decent replacement - Jon's blend of poblano and jalepeno), and the Hickory Bacon Blue Burger.
All of the burgers were cooked to temp, crunchy on the outside, moist on the inside, and served on a toasted white-squishy bun. The brothers have their own house-made sauce called Schnipper Sauce that was excellent. Jonathan told me he was inspired by the Pacific Northwest goop sauce recipe in my book but added a few more ingredients to his version.
Upon his first bite, Kris B exclaimed, "MAN. It exploded when I bit into it!" Sure enough, juices were running. My bacon/cheese/onion burger was a taste explosion as were the green chile and blue burgers. The Blue, Jonathan's opus, piled high with bacon, lettuce, tomato, hickory bbq sauce, melted blue cheese, and deep fried onion strings, was dreamy.
The Schnippers clearly care about how burgers are made. These aren't bloated gourmet burgers or tasteless steakhouse burgers, these burgers are made with an attention to what goes into the American classic. The brothers apparently spent months on the road doing burger research all over America (much like yours truly) and it shows.
And it should be noted that the chocolate malt I ordered actually had malt powder in it. Very few in NYC seem to understand this concept. Also, we were presented with awesome cheese fries that were identical to the ones you may have enjoyed (at 1:30am after a night of hard drinking) at Chicago's infamous Wiener's Circle. I think that may have been the first time I've guiltily enjoyed that cheese goo sober, and I liked it.
Posted by Hamburger America at 6:06 PM

I was not surprised at all by the results. Not that thin beat out thick, but that the results were nearly tied. What you should know is that for the first few days of the poll thin was way ahead of the thick patty (by like 15-1). This leads me to deduce that thin patty lovers know exactly what they want whereas fans of the thick patty had to think about it for a while.
New poll up now. Be honest. I can't see who is voting.
Posted by Hamburger America at 9:32 AM

Pinch Me - Is the Animal Style Dbl Dbl Really That Good? 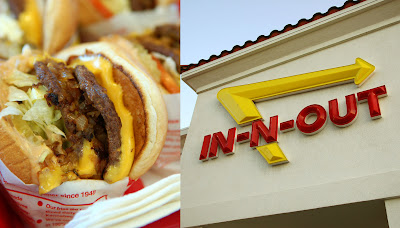 Oh yes it is. I found myself on the left coast again this week and had to see if my recent revelation was true. After years of eating a standard In-N-Out Double-Double I ventured into the secret menu and I'm never going back. After a short 45 minute trip to a San Jose In-N-Out, I once again ordered the Double-Double Animal Style and found the revelation to be true. The cult favorite is a nearly perfect specimen. It's gooey, hot, and exploding with flavor thanks to the three things you will not find on the standard menu burger - sliced pickles, grilled onion, and a burger patty that has been apparently spread with mustard before it hits the griddle. Why this burger is not the standard for In-N-Out is beyond me.
The burger was so good that I was back the next day, only 20 hours later, for another. Thank God I live on the East Coast.
Posted by Hamburger America at 10:04 PM