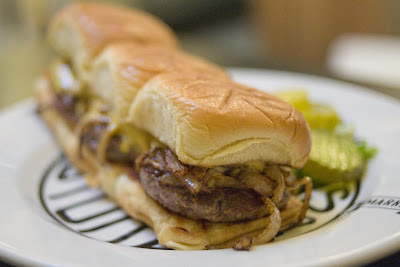 When Nick Solares asked me to join him at Shopsin's for sliders I jumped at the chance because Nick is friendly with the infamously vocal Kenny Shopsin (at least he hasn't been tossed out of the restaurant, yet). I would have loved to enjoy Kenny's sliders anonymously but no such luck. Kenny, a frequent reader of this and other food blogs, was fully aware of my presence from the moment I stepped into his corner of the Essex Street Market and razzed me until I stepped out. To him, I'm a jerk-off that's "f*cking those guys at that place in Red Hook, Yeah, yer all f*cking each other." (?) He also had zero appreciation for my brand of hamburger reportage though it was clear that he had learned from it. He told me, "At one point we had every one of the burgers from your film on the menu." It was all delivered with a smile and I didn't get tossed out of the restaurant so things must have been going well (at least for this visit - way back in the late 90s Kenny tossed me out of the original Bedford St. location because I was with a party of 5).
I was there for the sliders (photo above courtesy of Nick) and if they didn't deliver I'd be disappointed. Nick had already called these the best in NYC city and he's to be trusted with burger accolades. Fortunately, they were incredible. A $10 order of 3 is roughly equivalent in size (and flavor) to 3 doubles with cheese at the White Manna. These are authentic sliders, not over-crafted, over-touched, fussed with mini burgers that some high end restaurants are pushing on their bar menus. Kenny actually cares about what he serves people and the attention to detail shows. The sliders are made from fresh ground beef from the neighboring meat market Jeffrey's (only a few steps away), the cheese appropriately American, the onions thin-cut and grilled, and the buns are none other than Martin's Potato Rolls.
The experience of downing sliders at Shopsin's was akin to the berating I received from the self-titled "mean bitch" Miss Ann of Ann's Snack Bar in Atlanta. Both visits, though peppered with direct insults, resulted in excellent burgers and friendly exits.
Posted by Hamburger America at 1:09 PM

Want to tell you about a great place I visited today up in Springfield, MA, called "White Hut". It's been serving tasty burgers since 1939 and it's unique in the approach to everything. There are really only 3 items, no menu and no tables. They serve burgers, hot dogs (deep fried!) and french fries. That's it.

The way you place orders is chaotic - there's no line; people just crowd around the counter which seats about 8-10, and the girl behind the counter takes orders as she can. You make eye contact or raise your hand when he asks who needs to order. Then you shout out your order, like "3 cheeseburgers, 2 hamburgers, all with fired onions, and 1 hot dog". Then she'll call out to you when it's ready to ask what condiments you want on them. After she hands the bags of goodness to you, you proceed happily to the cashier and pay.

The burgers are small, covered in scrumptious caramelized fried onions and nestled between soft squishy buns. Very old fashioned in look and taste. The burgers are done up on an ancient looking flat top grill, as are the onions. I took a photo too - definitely a place to check out if you ever make it to these parts!
http://img516.imageshack.us/my.php?image=whitehutxc4.jpg

Thanks for that Dave! White Hut is in my book and I'm a huge fan.

Fantastic. Miss Ann's never kicked me out of the Snack Bar, so I hope my luck continues at Shopsin's next week (before the Burger Bash!).

The sliders and pancakes are great, but I wish they were more reliable about when they'll be open. I took an extra-long lunch hour yesterday in hopes of getting some Shopsin's pancakes, but when I got there it wasn't open. Nothing about this on the website or anywhere else -- it's really a crap shoot.

White Hutt is amazing (in West Springfield, not Springfield proper). I was somewhat less amazed with the deep-fried hotdogs, although they were very good, but the burgers were nothing less than stellar.