No Buns at the Apple Pan! 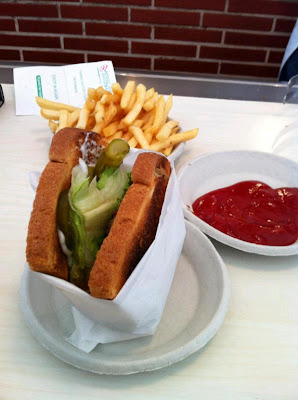 That's right, Los Angeles EBT Dan just happened to walk into the Apple Pan today during the SEVEN MINUTES that the iconic burger stand was out of buns. Turns out, the baker was running late and a number of patrons were served their burgers on toast. Dan reported, "The crunch of the toast definitely fought the crunch of the iceberg lettuce but it's still an Apple Pan burger, still phenomenal!" Order was restored but Dan managed to snap this rare shot of his Steakburger on toast.
Posted by Hamburger America at 6:06 PM