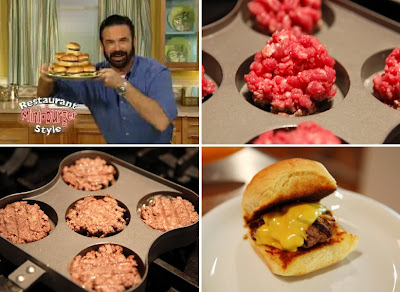 When Billy Mays is screaming at me to buy something I usually mute the TV as fast as possible. That is, until last month when he was a shill for the new Big City Slider Station. The wacky contraption caught my eye not just because it was hamburger related but because the 'station' employs the scoop-and-smash method, one of my favorite for making burgers. You need to click the link above to see the actual TV commercial that sold me. While you are watching, notice that the meat is never touched, it's scooped then pressed into tiny sliders. Regardless of the goofiness of Mays, I had to have this thing.
It took 3 weeks to receive my Slider Station. When it arrived it was much smaller than I had imagined and smelled of noxious chemicals (which I'm assuming was the non-stick surface that was clearly brush painted on). I washed the station thoroughly and left it to heat up for 15 mins to burn off any crap residue that may have made its way from China.
While the Slider Station heated up, daughter Ruby and I ground fresh chuck (twice) in my grinder. We scooped balls of the fresh ground, placed them in the 5 slider receptacles, sprinkled with salt, and pressed (gently) with the cover. In about 2 minutes, we had sliders! I was amazed. The damn thing actually worked. The method of extraction for the finished sliders is to lift the cover off, flip the station upside down and smash on a flat surface (like a cutting board). This is where things went wrong. Only one slider came out, the rest were stuck and had to be pried out in pieces with a knife. I chalked it up to new equipment and vowed to butter this non-stick contraption next time.
Ruby and I enjoyed the sliders the only way you should - on tiny potato rolls with melted American (under the broiler) and grilled onions. Didn't Mays sell Oxi-Clean too? He was right about that for sure. Maybe he's right about this as well.
Posted by Hamburger America at 2:19 PM 15 comments:

I knew she'd sell the place (because she told me she would). When I interviewed Michelle Lyons for my book back in March 2007 she told me she wanted to sell the nearly 100 year-old burger wagon outside of Dayton and move to Hawaii. I didn't believe her, and didn't even include that in the book. And then this showed up in the Dayton Daily News. The new owner, Jack Sperry, is as wise man. He told the paper, "I'm not going to change anything - it's working just fine as it is." Damned right it is. These little deep-fried wonders stole my heart. When I showed up to sample the burgers for my book I ate 2 doubles then went back for another. Thank goodness tradition prevailed once again and a burger steeped in history was spared.
Posted by Hamburger America at 8:01 PM 4 comments: 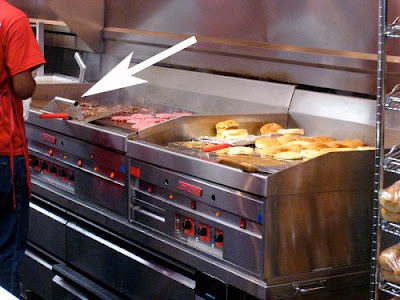 The thin patties at one of my favorite burger chains just got thinner, at least at my local Five Guys location. For those watching the action behind the counter as the burgers are being griddled, most are horrified that the standard practice is to 'smash' the burgers into thin patties. What most do not realize is that 1) this was the standard practice for all short-order burgers made before there were such things as patty formers and 2) that Five Guys has a secret. The griddle cook at every Five Guys employs a sort of channeled bacon weight that only allows the press to go so far before its edges touch the griddle (see Adam Kuban's photo above). The result is a patty that does not get the life pressed out of it. Seems as though the cooks at the new Park Slope Five Guys have been doing some serious pressing because the channels on their 'smasher' are bent out of shape rendering the design useless. I tried to explain this to the cook on duty and naturally she looked at me like I was a crazy person. I actually like the thinner, looser patties so don't tell anyone that their burger press is busted...
Posted by Hamburger America at 4:47 PM 2 comments: