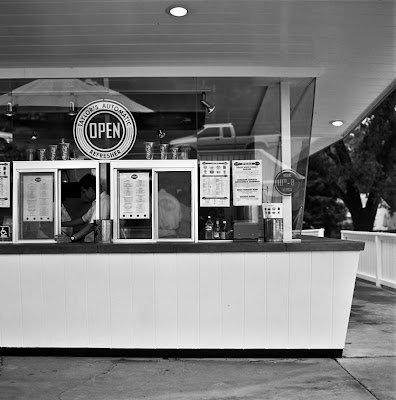 Taylor's Refresher, the Napa Valley drive-in burger joint that has been serving burgers for over decades (and is in my book), apparently made a big deal this week about changing their name to Gott's Roadside Tray Gourmet. It's a strange combination of words, but a good way around some legal crap the Gott Brothers were apparently going through. I have no problem with the new name as long as the burgers are still amazing. However, I'll bet the Taylor's Refresher brand will be a hard thing to shake.
Posted by Hamburger America at 8:08 PM 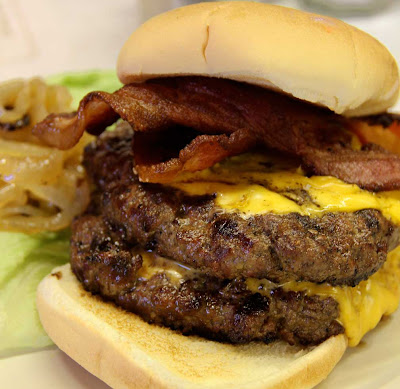 Somehow this classic burger joint in the Bay Area slipped through research for the first edition of my book. I'm sure there are many places like Val's Burgers that I missed but man, what a miss! The place serves excellent diner fare to a sea of happy locals in booths and sports one of the longest counters I've ever seen.
The burgers at Val's come in 3 sizes - the 1/3 lb Baby Burger, the 1/2 Mama Burger, and the 1 lb, Papa Burger. I of course opted for the, urp, Papa but it was way too big. I tried to compress the burger to fit it into my face and still couldn't ram it in. Next time, it's the Mama Burger for me. And it was so good, cooked over a flame grill on a toasted bun. I asked for sauteed onions and received a side dish with an entire onion's worth.
I was also coaxed into an amazing shake referred to by regulars as the 'Rootanana' - a root beer and vanilla shake with an entire banana blended in.
Research continues and the next big trip is just around the corner.
Posted by Hamburger America at 11:25 PM

Hamburger America 2 Is On The Way 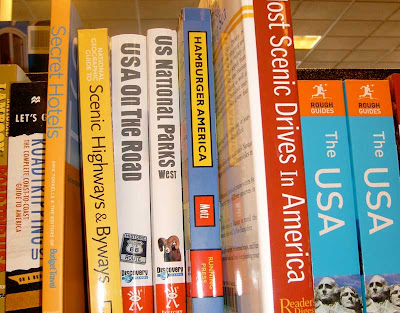 It's official. The revised edition of my book is happening. After a little negotiating, my amazing agent has struck a deal for the next edition of Hamburger America that is due to hit stores in Spring 2011. The updated version will include an additional 50 burger joints bringing the total for the book to 150. The existing entries all need updating and unfortunately 3 are coming out. That means I have to visit 53 burger joints in the next few months...
The good news is that I've already complied a list of about 40 viable entries thanks to the endless string of email I've received in the last 2 years. I've also learned much from my new network of EBTs (Expert Burger Tasters) all over the country and I thank you all for your hard work.
The new list is a secret and consists of places that meet all of my criteria and need to be in the book. I'm still on the search for an additional 13 burgers so if you have a strong opinion about your favorite let me know. I've opened comments for this post so go ahead and sound off. Remember the criteria however:
Let the madness begin! I hit the road next week and man have I got a lot of eating to do.
Posted by Hamburger America at 10:41 AM 46 comments:

LA for Work, and Burgers 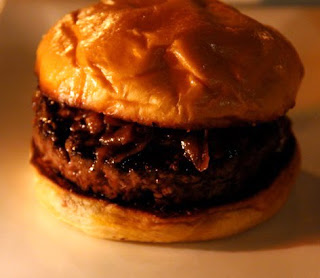 I'm on a flight from LA the night before the Academy Awards and as you could probably guess the plane is empty. In the past few days I've been working (filming), but of course taking time to eat burgers. There was the obligatory stop at In-N-Out for a Double-Double Animal Style and a visit to my home-away-from-home the Apple Pan, but on this trip I hit Umami Burger for the first time.

More than 20 close friends and my father-in-law have urged me to check out Umami so there was pressure to get this burger in my mouth. The Umami empire has expanded in the last few months from a small, clean, mall-front store to a few large, hip restaurants (and a food truck is on the way apparently, and an outpost in the Fred Segal store). We visited the Umami way East on Hollywood Blvd, across from the old-school Cheetah's Exotic Dance Club. Our wait on a Friday night at 8pm was almost an hour. I was in for the ride and not going anywhere. I didn't care how long it took, I was excited, hungry, and was going to eat the burger that so many of my trusted burger compatriots have gushed over.

Did I like it? Well, yes, I did, though I couldn't help but think that it could be better. The burger (above) didn't live up to the hype, but that's the way it often goes, right? And to present your burger with a bun, toppings and an Japanese food theory that requires a flow chart takes a lot of balls (this isn't just any burger, it's an 'umami' burger). The skinny here was that my burger was raw, and so were the other burgers brought to the table. Much in the way April Bloomfield will err on the side of underdone for her vaunted pub burgers at The Spotted Pig, so too follows Umami. I could sense greatness, possibly achieved by an additional 30 seconds on the grill.

I won't get into the Hatch Burger (which didn't have a shred of green chile near it) or the tater tots (which were just deep-fried mashed potatoes) because I understand, I think, why people put their own spins on classics. It's just not my style.

I'll be back and will request the additional 30 seconds of grill time. It's the only way to order at Spotted Pig and the results are always amazing. The same should stand for Umami.

Posted by Hamburger America at 9:09 PM

An Appearance on Coop's Kitchen 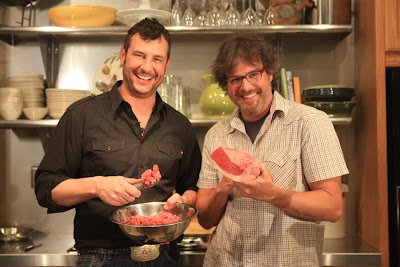 Last weekend I was asked to be a guest on the new web series Coop's Kitchen hosted by country recording artist Cooper Boone. They asked me to come on the show and make burgers and they wisely chose to grind fresh beef for the cameras. Armed with my trusty KitchenAid grinding attachment and fresh beef from Pat LaFrieda we ground fresh chuck and brisket, scooped, and went straight to Coop's flattop griddle. The burger we decided to make was the Oklahoma Onion-Fried Burger, the burger I learned to make by watching Marty Hall at Sid's Diner in El Reno, OK.
Coop had a great time grinding beef and the burgers turned out well. He made a kickin' chipotle BBQ sauce with Grandma's molasses that we spread on the burgers. So good.
At the end of the show we played guitar and Coop sang the Allman's Ramblin' Man. I asked him before the show how his music was with NASCAR nation and he replied quickly, "I love NASCAR, sang the national anthem at Watkins Glen!" Yes he did (click here).
Look for the episode in a month or so.
Posted by Hamburger America at 4:02 PM