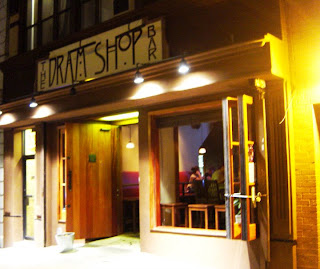 My neighborhood of Park Slope, Brooklyn is seeing a true hamburger renaissance of sorts with the opening of 4 new burger joints in just the last few months. Two are not worth it unfortunately but the other two are outstanding. One of my faves, Five Guys, is now open only 5 blocks from my house and the bar Dram Shop on 9th St. serves up a damned fine burger. Good friend and burger confidant Josh 'Mr. Cutlets' Ozersky sent me this email:

"George, have you eaten this Dram Shop burger? It's great! I went there today and they made it for me mediumish, and it was fabulous! Loved it! Eat it and tell me what you think."

Now, understand that Josh and I have very similar tastes when it comes to burgers. Josh loves thin-patty wonders and, like me, tries to avoid burger behemoths and bloated wallet-busters. But it was seeing 3 exclamation points in his short email that had me itching for more.
The Dram Shop burger, at the top of their short menu, is most definitely a thin-patty wonder. The burger comes with shredded lettuce, tomato, chopped onion, mayo, and mustard on a white squishy bun. By default the burger is a double and the patties are fresh ground, thin, and square and cooked on a flattop griddle. I noticed on the menu that the burger 'recipe' comes from the owner's family's Mallow Grocery in Dallas. There's no question, with the mayo, the twin patties, and the shredded lettuce that this is a classic Texas drive-in burger. It is as authentic as it gets for NYC - close your eyes, take a bite, and end up in Texas. Josh was right. It was fabulous.
Posted by Hamburger America at 10:14 PM 4 comments: 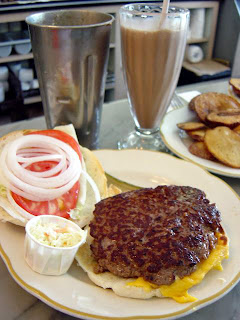 I was in the neighborhood of the only Long Island burger spot in my book today and it just happened to be lunchtime. Expert burger taster Kris was also along so burgers at Hildebrandt's was the call. We sat at the long, classic, marble counter and ordered doubles and were confronted with an alternate possibility. The counterman asked, "Do you want two separate patties or should I smash them together?" Hmmm, think quick. A bigger burger or two thin patties? Forgetting that Hildebrandt's serves 1/4 pound burgers we opted for the "smashed together" version and were presented with enormous 1/2 pound burgers. Remembering that 2 patties see more grill surface thus have more griddle char we chose incorrectly, unless you like large burgers. Next time, a double with two patties (and bacon) for me. It's still a great, fresh-ground burger though and nice to know you can order your burger here two different ways!
The milkshake in the photo was a chocolate malt and was enormous. Believe it or not, the contents of the metal cup filled the glass three times.
Posted by Hamburger America at 11:37 PM 5 comments:

Excerpts From the Book On A Hamburger Today 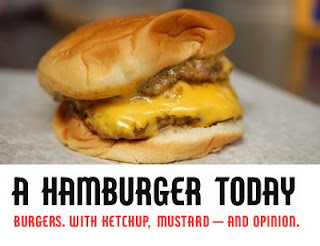 My burger-buddies over at AHT have started to run excerpts from Hamburger America on their blog. The plan is to roll out an entry every two weeks, 25 in all, until next summer. The posts are accompanied by photos from the book and so far 2 of the 25 have been posted. Look closely at the double cheeseburger in the photo (from Bud's in Colorado) and see if you can figure out why the bun looks like that...
Posted by Hamburger America at 1:37 PM 2 comments: Last weekend I did one of the hardest things I've ever done in my life - I spent 2 hours flipping burgers at a very busy beach cafeteria.
I know a lot about burgers. However, I don't know a lot about making burgers. Given the time and space I've been know to make a mean, tasty patty in my great-grandmother's 100 year-old skillet. Making burgers for waiting, hungry, PAYING, customers was an experience that was foreign to me, until last Sunday.
The beach club on Long Island, NY that I've been going to since I was born has a very efficient short-order kitchen that can serve over 400 lunches a day, mostly hot dogs, fries, sandwiches, and burgers. The burgers on the menu are frozen so I agreed to a lunchtime shift on the griddle making burgers from fresh-ground 80/20 chuck. Mostly I wanted to see if the patrons at the beach could tell the difference between frozen and fresh. I chose the scoop-and-smash method popular at most burger spots across America and threw in the onion-fried burger from Oklahoma for good measure.
For those that have run a short-order griddle I have all new respect. My hamburger heroes across America that spend hours, day after day, year after year, doing what I did for 2 hours are true martyrs. It's hot, loud (exaust fan), and greasy. At one point I was behind by 27 burger orders but still moving as fast as I could. By the end of my shift I had sent 120 burgers out to waiting patrons that were thankfully impressed. I was wiped out.
Here's to my first and last trip to a working griddle. A lesson learned, not to be taken lightly.
Posted by Hamburger America at 9:28 PM 5 comments: