The Kid's Bun at the Billy Goat 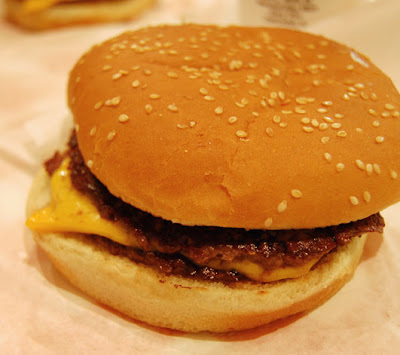 The original Billy Goat location, the subterranean downtown Chicago watering hole, makes a great burger to soak up the booze you'll be drinking but I've heard from more than a few people that their homemade buns are too large. Sure, if you order a single patty (even after the grillman has told you 'triple much better!') you'll have a hard time trying to find the patty on that throw pillow of a bun. I usually order a triple or a 'Sosa', a burger with 4 patties and 3 slices of cheese. The homemade Kaiser rolls are designed for multiple patties.
I've discovered a bun alternative for all of those haters out there so it's time for you to give the burger at the Goat another shot. I was signing books there back in May and Bill Sianis produced a single patty on a white squishy bun for my 4 year-old daughter. He explained, "That's our 'kid's bun'." I was in Chicago over this past weekend and gave it a shot (see photo above). I ordered a double with cheese on a 'kid's bun' and got a large, sesame-seeded, soft bun. Just to make sure they could handle demand I asked how many they keep on hand. They told me, "About 40 a day." Next time I'm ordering a Sosa on a kid's bun.
Posted by Hamburger America at 8:32 AM

Too bad some folks dont like the bun. If it's "too big" put more meat and cheese on it! Personally, I love the bun. I am in Chi-Town right now, going there for lunch today and I think the bun alone is worth the trip. Although, a SOSA on a smaller bun could be seen as a low-carb option.