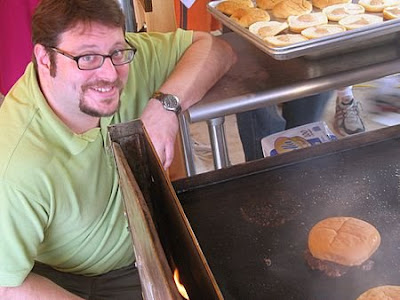 Good friend and healthy competitor for burger attention in NYC Josh 'Mister Cutlets' Ozersky  is designing a burger. He was silently jealous of the fact that I've had a burger named after me for years and finally did something about it. He said this on his blog The Feedbag the other day:

"It's often struck me as an injustice that George Motz... got to create one of the city's best burgers, and I didn't. The Motz Burger at Harry's Water Taxi Beach, is brilliant."

The 'brilliance' that Cutlets speaks of lies in its simplicity. The Motz Burger is not about crazy toppings or gargantuan proportions. Fresh ground beef (ground practically at the griddle) is scooped and pressed onto a flattop and served on a toasted white squishy bun. Harry has added his signature burger sauce (Schnack Sauce) but the Motz Burger tastes great with or without.
The burger Cutlets is creating will be called the 'Big O' and will make its debut at a future hamburger venture planned by the owners of Steak Frites. Unfortunately, Cutlets does not yet know what will go into said burger and is uncharacteristically taking suggestions on his website. Cutlets knows his burgers though and the 'Big O' should be a hit (assuming he avoids the suggestions that I've read already.)
Oh, and I should mention that the burger Cutlets is posing with in his post (and above) is a Motz Burger on the griddle...(photo by Jason Perlow)
Posted by Hamburger America at 8:52 AM